Gianni Cella was born in Pavia on March 4, 1953, he studied at the Liceo Artistico di Brera, where he then continued his studies at the Academy, where he graduated in painting with Professor Manfredi. He immediately devoted himself to painting, sculpture and drawing. He will then turn to fiberglass, as a historically little-used material but with interesting characteristics as it is easily modeled like clay but able to achieve a homogeneous result, hiding the modeler's imprint. In addition, he continues to use the technique of drawing and oil painting on canvas. The inspiration for his works comes from the word, just as the title embodies the meaning of the work, often the creation of the work starts from the title and then leads to the physical realization. With his works, the artist wants to make people think, transmitting messages halfway between the tragic and the grotesque but with a playful, colorful and captivating language, a mirror of the contemporary consumer society.

He exhibited for the first time in 1982 together with Pallotta and Ragni, with whom he founded the collective Plumcake , hosted in the rooms of the gallery Il Diagramma by Luciano Inga-Pin. He will separate in January 2000 to continue his artistic career alone. His first solo exhibition was held in 2002 at the Maria Cilena Gallery in Milan, whose catalog is edited by Maurizio Sciaccaluga.

He returns to the Milanese gallery in 2004 with Produzioni Agrodolci, immediately after the bi-personal exhibition with Stefania Ricci at the Angelo Falzone Gallery in Mannheim, where he will present again in 2006, together with Corrado Bonomi, Warum Erwachen? proposed again in Gattinara at the Art and Other gallery. The collaboration with Falzone was inaugurated in 2000 with a group exhibition following the success of Toy Story at the Tortolì museum "Su logu de s’iscultura" and again with the participation in Art twente 3 at the Hengels Expo center. In 2008 he exhibited in Milan, in the foyer of the Teatro dell’arte with Criminal Painting and in 2009 he inaugurated the cycle dedicated to Vincent Van Gogh with Create 10, 100, 1000 Van Gogh at the Pinacoteca Belossi in Varallo Pombia, curated by Luigi Cerutti.

In 2011 he returned to exhibit abroad, at the Arrivada Gallery in Chur, sharing a solo show with Luciano Palmieri curated by Renato Barilli. In 2012 he follows the solo show with Giovanni Lamberti, Navigare a vista, at the Vigato Studio in Milan, and Eden Installation at the Antonio Colombo Gallery in Milan.

In 2013 he created the biographical installation Una vita lemme lemme at the Monopoli Gallery in Milan followed by other lucky cycles of works such as Spirito del lago and Buoni e cattivi, respectively inaugurated at the Melesi gallery in Lecco and at the Globart gallery in Aquiterme. Among the most recent collaborations we recall No Limits Except Art, two-person with Corrado Bonomi at the Zaion Gallery in Biella and Gianni Cella, hero of painting, housed in the Antonio Battaglia gallery in Milan.

Important collaborations on a national and international level are reported such as the Kids are us project at the Civic Gallery of Modern Art in Trento in 2003, Ri-presentation - Generation '80s in Grenoble in 2009, in the same year he participated in the exhibition for Chilean Maria gallery. In 2012 he had the opportunity to exhibit at the Fabbrica del Vapor di Milano on the occasion of Milan's self-produced design and again on the theme of design he participated in the exhibition of Celadon vases, first in the Triennale in Milan and subsequently at the Gwangju Biennale, South Korea. 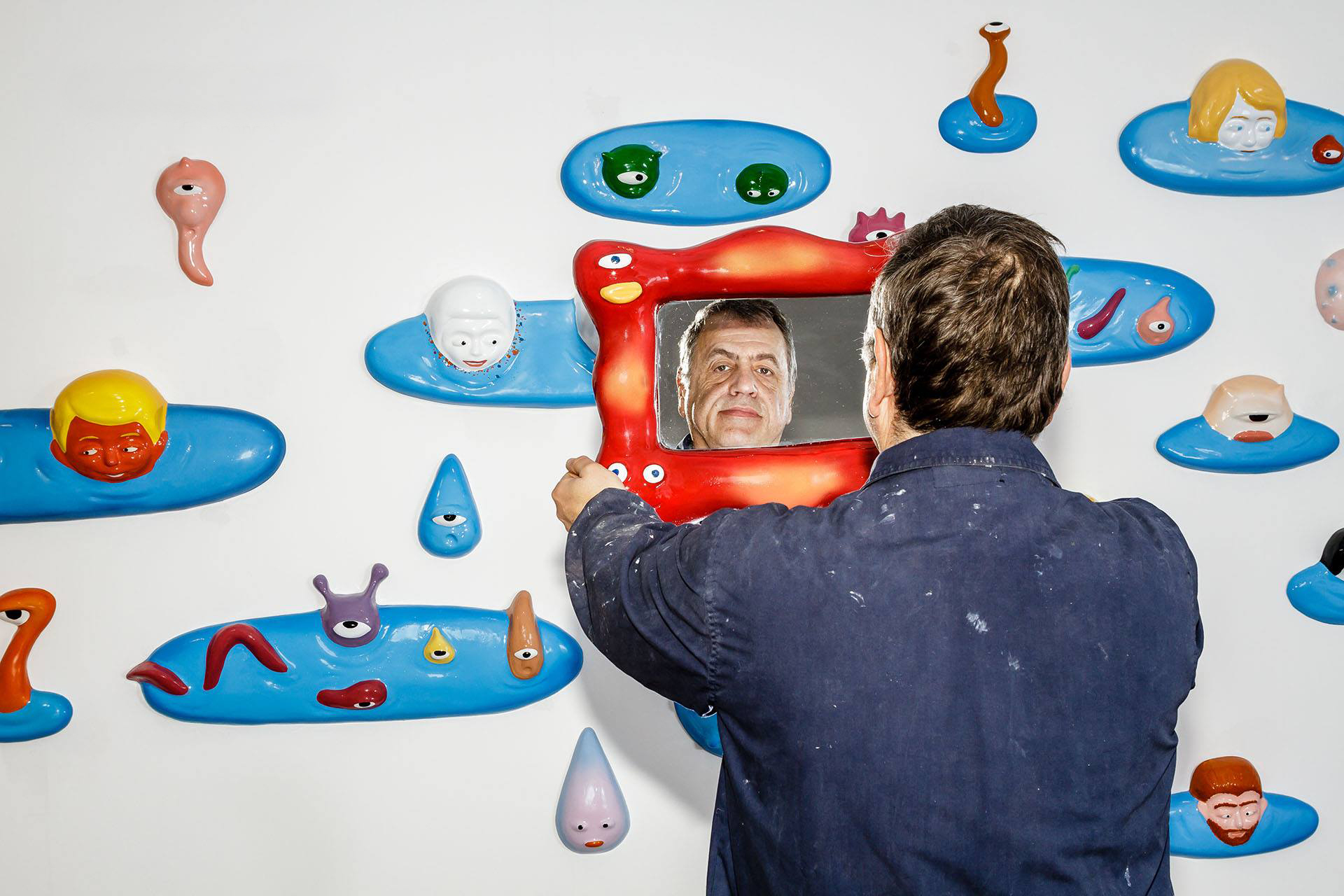